By continuing to browse, or by clicking 'Accept', you agree to the storing of cookies on your device to enhance your browsing experience and for analytical purposes. To learn more about how we use cookies, view our cookie policy.

PRM Newage has now completed its range of GSE drive axles. As the company's Managing Director, Rob Turner, explains: "We took our range of construction axles and made them suitable for GSE applications.

We will soon be introducing a new PRM 60 gearbox along with changes and upgrades to our PRM 80 and PRM 120 gearboxes.

The PRM 60 gearbox with helical gears will be available from summer 2016.

This will provide a new family of mechanical gearboxes 60, 90 and 125.

These new gearboxes will have a modern pus... more

The new PRM 280 gearbox case design allows the option of fitting a power take off unit to the gearbox.

Tug Technologies Corporation based in Kennesaw, GA, take their first 512 Axle for Testing in their MA Tow Tractor range.

Eagle DWC-LLC based in Dubai, UAE, take their first production 515 Axle for production in their AZM Tow Tractor range

515 Axle Upgraded for use on the Toyota TD23

After the success of the first 515 Axles on Toyota TD25 Tow Tractors & at the request of several customers requiring upgrades for the Toyota TD23 Tow Tractors the Axle design has now been changed.

With the change in mounting configuration the Axle is now suitable for use on both Toyota TD23 & Toyota TD25 Tow Tractors.

Well done to James Turner who has after four years of very hard work today completed his apprenticeship. James will now move on to the Drive Axle Assembly area. 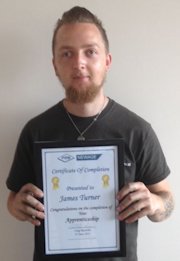 Sage Parts our North American distributor receives the first production 515 Axles. The 515 Axle is a direct replacement for use on the Toyota TD25 Tow Tractor. Contact www.sageparts.com for further information.

Well done to Ellena Middleton who has after four years of very hard work today completed her apprenticeship. Ellena will now move in to the Technical Department. 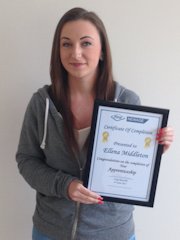 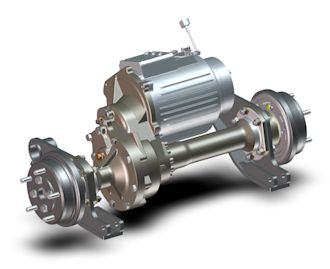 The past week marks a historic moment at PRM Newage; the 512th 512 Drive Axle rolled off the production line. Destined for TUG Technologies in the USA, the 512 was the first of the Ground Support Equipment Series of axles offered by PRM Newage Ltd. There are currently 4 axles being offered; the 512, 515, 612 and 613. All the GSE axles offer dry disc brakes with options of parking brake. There are additional axles u... more

Trowin Industries based in Eau Claire, WI, take their first production 612 Axle for production in their GSE range.

Sage Parts our North American distributor receives the first production 613 Axles. The 613 Axle is a direct replacement for the OMSI Axle used within the TUG Range. Contact www.sageparts.com for further information.

NMC-Wollard based in Eau Claire, WI, take their first production 512 Axles for production in their M60 Tow Tractor range.

We are exhibiting our range of dedicated baggage tow tractor axles. Our 412, 512 and 612 tow tractor axles are available in many different track widths, with both braking and mounting options. This range has maximum load ratings from 7,000 lbs thru to 22,000 lbs.

You can find us on Stand 307 at the Rio All Suite Hotel and Convention Centre in Las Vegas.

The show runs from the 14th to the 16th October. More information can be found here.

Charlatte USA based in Bluefield, VA, take their new 215 disc brake axle for use in their GSE belt loader applications.

The Liftaloft Corporation based in Muncie, IN, take their first production 415 Axle for production in their Electric GSE range